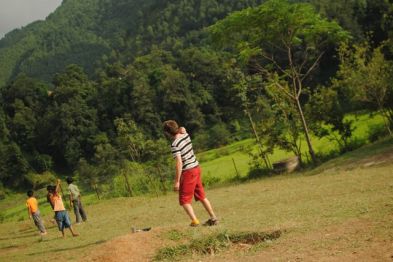 In Nepal, we all worked with the Esther Benjamins Trust, a charity that rescues Nepalese children, particularly those trafficked into Indian circuses. Half the group worked with some of the older children and young adults who have formed their own contemporary circus company Sapana with the assistence of professional circus performers. My group worked at the refuge itself, a 30 minute drive from South Kathmandu’s Patan, with any of the other children who wanted to take part. Sapana were preparing for a fundraising show at The British School, and our group would perform a short devised piece at the same event – which, just to make things interesting at our last stop on the tour, was in only 10 days time! (We had been expecting the usual 2 weeks.)

Of everywhere we went, I think it was the EBT refuge that defied expectations the most. Even though some of the children in our group had only been rescued less than a year ago, and all of them have undoubtedly had part of their childhood taken away from them, they were the most open, affectionate bunch of back-flipping monsters from the day we arrived. As in Lucknow, the group fluctuated from day to day, but we usually had around 35 kids taking part at any one time. More problematic was the age range (5-19) but even though keeping everyone interested was a tall order, the dynamic at the refuge is one of working together, and we could rely on older members to help with translating and explaining exercises. In fact, we decided to split us into groups with mixed ages to make the most of how well they worked together.

Having lots of children with experience in performing meant that they whizzed their way through our workshops like nothing else, leaving ours heads spinning after the first few days (might have been the altitude too..). As we were pushed for time anyway, we began thinking about the performance after just 3 days of workshops, brainstorming fairy tales that they might like to use as a basis. A democratic vote chose “The Frog Princess”, and each group took on one scene from the story, with group scenes at the beginning and at the end.

One thing we struggled with that we weren’t expecting was the issue of language: lots of the children wanted to perform in English, and seemed to think Nepali was inappropriate for a piece of theatre – we wanted to do what made them happy, but didn’t really want to condone negative associations with their native language. In the end, it was a truly bilingual peformance, with Will acting as narrator between scenes to clarify the action to the mostly English-speaking audience.

Although there was a huge enthusiasm for performing amongst the group, we had to give special attention to its practicalities: being seen and heard on stage (not to mention not being seen and heard offstage), remembering lines and cues, entrances and exits. It was a very ambitious piece in this respect, and the result was a little rough around the edges (you could feel those missing extra days) but we were incredibly proud of the vibrant, energetic result of everyone’s hard work.