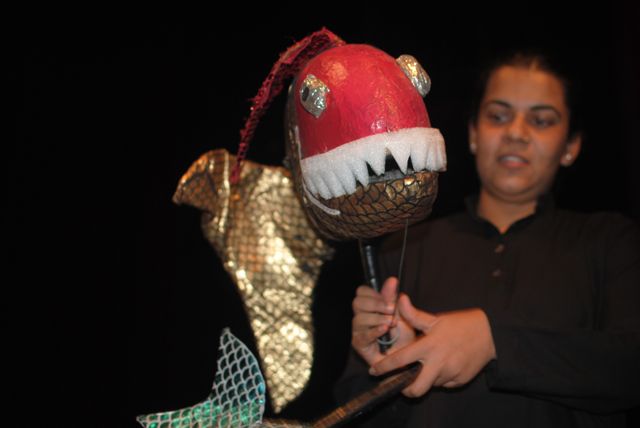 After having a 2-day workshop with the members of Katkatha puppetry company, we were very excited to see them in action. The Little Blue Planet is the story of Earthu, who creates life – plants, animals, and finally, a human, whose greed eventually causes Earthu, his creator, to suffocate. It is up to the human to change the way he lives his life and save the planet from destruction.

Earthu was a large Bunryaku puppet (meaning it was manipulated by 3 puppeteers whose faces were covered) with a human body and an earth for a head, whilst the human was played by, you guessed it, a human. Other puppets were smaller, manipulated with sticks. All were without exception beautifully crafted and ingeniously designed; the scales of the fish glinting as if they were underwater. The story was told without words, backed by a rousing soundtrack which unfortunately suffered a few technical glitches.

Only part of the action was played out in front of the cyclorama backdrop – every other scene took place behind it, using shadow puppets and storyboards to illustrate the scope of the tale: most memorable was the circular cityscape that spun into oblivion as the human’s greed grew.

This was a gorgeous children’s show, inventive and informative. The only quibble (from a parent in the row in front of me) could be that the Earthu puppet itself was a little on the creepy side…