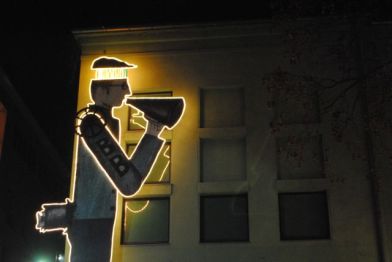 The first run of Ravenhill’s self-proclaimed “anti-war play” on the main stage of the Berliner Ensemble in June of this year was a flop – that is, only 70% of seats were being sold, too low a figure for the theatre’s quota. So it reappeared this month on the former rehearsal stage, a less formal venue with a small capacity, and some slight adjustments. Most intriguingly, one of the 11 scenes that Peymann had originally chosen from Ravenhill’s short play cycle, presumably the most controversial, in which a group express the desire to burn outsiders to death (it still features in the programme), had been cut completely.

Most interesting would have been to compare the two productions, but as I’m not in the position to do that I’ll just have to judge it on its own merits. Maybe it’s fairer that way too: the play I saw certainly didn’t deserve to be deemed a flop. Against the background of the broad white steps of Schütz’s stage, painfully acerbic, cynical and often over-the-top scenes were played out with strong acting and an impressive economy of style to create powerful, symbolic images of a destructive world. By the end the whole audience was physically cringing as a group of artists with wheely suitcases explained how they help people with their “crazy kind of Performance Art-Installation type thing” – whether Ravenhill’s work can really take the moral high ground here is a matter of opinion.