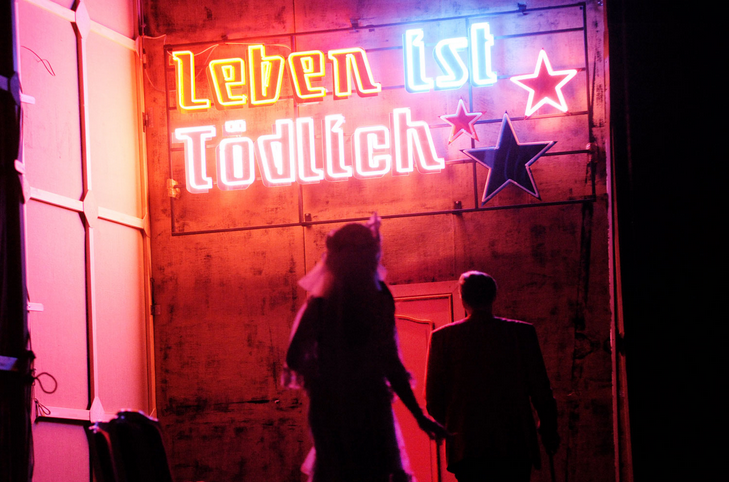 The Volksbühne Berlin raced ahead at this year’s Theatertreffen, producing 3 of the 10 best productions of the season and leaving the rest of the German-speaking theatre world trailing behind. Having never been, I decided it was high time for an undercover mission to find out the secret to their success.

My sources had informed me that the Volksbühne was the hipster place to be. Of course, as a first-time detective I need to keep an open mind in the great hipster debate, and try to get an accurate feel for who is spending their Friday night round at Herr Regisseur Castorf’s house. My first clues, however, confirm my sources are reliable; lining the steps of the foyer are a suspicious number of … yes, young people! What’s more, they don’t look unlike this rather scathing approximation. Then again, in the grand scheme of fashion, neither do I. (Mental note to work on my disguises). Beyond the foyer is copious space around the bar to relax pre- and post-show, in the familiar “shabby chic” style, mismatched furniture and worn-out paintwork. So far, so hipster.

Inside the auditorium it’s not so straightforward. Maybe it’s because grey hair and bald heads catch the light, but to me the age-range (and by extension, style choices) of the audience seems to go beyond the hipster cut-off point. Now, this may have been because those hipsters outside were also running late, just like me and my companion (who’d understandably needed some last-minute convincing that his German would be up to a 4-hour adaptation of a Dostoevsky novel without surtitles), whereas the more mature audience members had showed up early, hogging the best seats.

The play we were there to see that night, “Der Spieler”, just to clarify, is not one of the three Volksbühne productions chosen by the jury for this year’s Theatertreffen, but I am assured it is “typical Castorf” – and therefore, typical Volksbühne. René Pollesch, whose play “Kill Your Darlings! The Streets of Berladelphia” will be performed at the Theatertreffen this year, has worked at the VB since the start of his career, and before turning his hand to directing, Herbert Fritsch (the director of the TT12 production “Die [s]panische Fliege”) was a member of Castorf’s trusted circle of actors from 1989.

Dostoevsky’s short novel “The Gambler”, to give you some manner of literary background, was written in order to pay off – surprise surprise – gambling debts. A kind of doomed tribute to the cast-iron hold that those two destructive forces, gambling and love, can have over a man. On the stage of Castorf’s adaptation is a screen, six old-fashioned red velvet chairs, and a giant turtle. What follows for the next four hours (not including the interval – so much for ‘short novel’) makes about as much sense as you would expect a screen, six old-fashioned red velvet chairs and a giant turtle to make. Not to mention that much of the action takes place in a room the audience can’t see, so we must watch on a screen. A screen which is itself obstructing the view of the room we can’t see. I have a headache.

Actors come and go, pulling down backdrops, climbing into reptiles (a crocodile soon joins his friend the giant turtle) and swimming through piles of potatoes. But most of all, they shout. They shout with great urgency, seemingly without breathing. They shout for hours. For four hours. Sometimes at each other, simultaneously; sometimes in Russian. A pattern begins to develop in my row: my companion turns to me inquiringly for explanation, upon which I shrug and glance, very subtly of course, at the German lady on my right, who more often than not is asking her friend if she can understand what’s going on. With relief, I turn back to report the great news – the Germans are as confused as we are!

Well, I’ve been taught my lesson. Theatre doesn’t have to be logical, reverential, comprehensible – or enjoyable. Could it be that Castorf is punishing his audience? Did we do something to offend him? But punishment can’t be the right word, or that would make most of the audience members masochists; even though I overheard countless interval conversations discussing the sheer expanse of time remaining, only seven people out of an almost full house actually walked out. Not only that, they sat obligingly clapping through bow after bow in the traditional German style. (It’s unbearable: even if I thought the play was the best thing since beans on toast, I’m bound to hate it by the time I’m allowed to stop clapping. One bow, then get off the stage please.)

But of course why should I expect the audience to leave when they knew perfectly well what they were getting themselves into. After all, Castorf has reigned supreme at the VB since 1993. And despite this hint five years ago that a major change in style was due, this 2011 production seems to fit his well-known conventions for the unconventional. I can’t imagine the audience reaction to this in London, where some would argue the avant-garde scene is virtually non-existent. Not that I prefer endless re-runs of musicals and Noel Coward comedies, but if this is avant-garde, it’s as tired and empty as they are.

This doesn’t bode too well for me…