Elongated paper lanterns suspended over the auditorium of the Berliner Festspiele’s main stage added a little visual interest to the Theatertreffen opening night’s obligatory speeches: Thomas Oberender, artistic director of the Festspiele, in praise of the 10 productions and the jury that chose them, and Bernd Neumann, Minister of State for Culture and Media, emphatically preaching the importance of theatre even in times of economic crisis (Q: Does Germany need so many theatres? A: Yes,       yes,       and      YES again).

There was even a spontaneous addition to the programme; a student representative of the Ernst Busch College of Performing Arts in Berlin, who, as the celebrities arrived, were gathered outside the Festspiele to protest the SPD’s looming decision to scrap long-intended plans to fund the school’s move to a better location.

But it wasn’t until the curtain rose on the set of Johan Simons’ triple Sarah Kane bill Gesäubert/Gier/4.48 Psychose (Cleansed/Crave/4.48 Psychosis) that the lanterns really came into play, revealing themselves to be an extension of the upside-down forest of cylinders crowding over an otherwise bare stage, a kind of connection between actor and audience member, or between “Victim. Perpetrator. Bystander” as Kane puts it.

A dirty, reflective square taking up most of the stage floor forms the stage, an overhang above the orchestra pit threatening its seeming security: That’s the set pretty much covered. Other than the piercing bright lights lining it and the odd prop lying on the outskirts, the trilogy is all about Kane’s words. And for those, Simons’ relies on his actors.

In Gesäubert, he takes the setting often taken to be a concentration camp (based on French philosopher Roland Barthes’ controversial thesis that “when one is in love, one is in Dachau”) and supplants it with that of children’s games of make believe. The first image alone, of the seven actors sitting on chairs in a neat formation, reminded me instantly of hours of pretending to be on a train. Once the dialogue started, the similarities with my playground antics became less straightforward to say the least. Kane’s characters play at fighting, at doctors; boys pretend to be girls and girls try to become boys (cue Blur), and both show what they think sex is like. The childish construct is a clever way of dealing with Kane’s stage directions, which call for such unstageable action as the hacking off of limbs and genitals. More than that, it was a natural fit with a text whose characters are exploring and experimenting with their bodies so freely – not to mention learning to write and count. Still, happy as I was to be spared an emo-angst-fest in this first hour, it was difficult to identify with these strange child-creatures and their even stranger shenanigans.

Gier had no such framework for the actors to cling on to. The four unnamed figures speak as if to each other, sometimes gossipy and intimate, sometimes enraged and paranoid, but Kane’s interlocking monologues only allow for rare moments of genuine connection. The actors spat their lines out with relish and precise passion from a row of mismatched chairs, and I found myself longing for more than just superb line delivery. The word “longing” (“das Verlangen”) comes up over and over, in fact, both in Simons’ programme and in relation to Sarah Kane. She expresses this longing – for love, to love and be loved – beautifully in her texts, but on stage it cries out for equally beautiful physicalisation.

For 4.48 Psychose, Simons outdid himself with a six-piece musical ensemble, including a grand piano, on stage providing what at first felt like bordering on schmaltzy accompaniment to the most deconstructed of Kane’s plays, which was literally read aloud from the text by Thomas Schmauser (unrecognizable as Robin from Gesäubert). Sandra Hüller sat silent amongst the sextet, at one unforgettable moment rising and unexpectedly singing her lines to Carl Oesterhelt’s music, arms and palms outstretched to the audience. I found myself holding my breath, and I was convinced that the whole grand piano business was worth it. I got pins and needles in my arms and had to give up taking any notes for the rest of the performance.

If I could have taken notes, they would have been a mixture of intrigue and mild frustration. Watching all three plays in a row offered a rare opportunity to actually experience how radically Kane’s approach to playwrighting changed with each play, whilst at the same time highlighting similarities – not only thematic ones, but even words (‘cockroaches’, ‘fault’, ‘wrong’) and whole lines (“I don’t want to die”). At the same time, it’s possible that at least Gesäubert and Gier lost something of their climaxes as their individual arcs were surrendered to the arc of the trilogy as a whole. And that’s assuming any of us are able to take in so much Kane in one go without “switching off our heads before the pain gets in” (paraphrased from Graham in Cleansed).

One last thing about those paper lanterns: In a production where it could be argued that inspired direction and powerful acting were made secondary to the sacred words of Sarah Kane’s scripts, it was a real shame that surtitles displaying those words in the original English were placed so far above the stage that from the stalls it was a straight-up choice between reading or watching – and in the balcony they couldn’t be seen for all those pesky cylinders.

NB: Inspired (or traumatized) by our “What is Theatre Criticism” TT-Blog seminar: I must add that I can’t promise that my judgement wasn’t clouded by the fact that it was so hot in the auditorium that when it started to rain on stage during Gier my first thought was that I wished it would rain on us too. 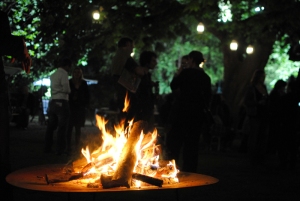 Originally posted on the Theatertreffen-Blog