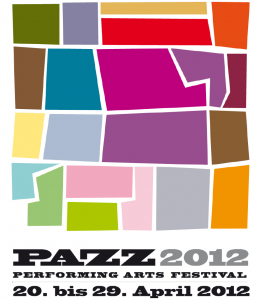 10 Journeys To A Place Where Nothing Happens
Juha Valkeapää & Taito Hoffren, Finland

Official start time was 6.30pm, but if you happened to be around the little tent in the car park a bit early you’d be welcomed in with quiet smiles and offered tea, coffee and freshly made Finnish pancakes. Latecomers weren’t left out either – so inevitably we didn’t “begin” until around 7pm. This “beginning” was signalled by the end of the pancake-making, when Taito and Juha made themselves comfortable in a pair of rocking chairs. At some point, Taito sang a song. The giggling in the audience begins. We are given copies of their diary, which details months and years of nothing happening:

“In 2008, we wrote some emails, in order to find out if somebody would be interested in a performance where nothing happens. Somebody was interested, but nothing happened. Image folder got bigger with one picture of a big Mercedes camper.”

But it’s not exactly true that nothing is happening inside this tent. The softly spoken duo manage to create a very rare thing: a truly warm, friendly atmosphere amongst strangers. I only wished the audience’s seating had been comfier, and the festival schedule had allowed me to linger after the “end.”

This Is My Dad
Ilay den Boer, Netherlands

Having invited them to Shabbat dinner and taken them on bus rides, in Part 3 of Ilay den Boer’s six-part autobiographical performance series “The Promised Feast” the audience simply sits in the auditorium. This doesn’t mean we don’t participate – at least not to begin with. On stage is Ilay and his father Gert. We are asked to read through a (very succinct) timeline of Gert’s life, and to ask questions about particular years. Casually, Gert retells stories from his time in Israel where he met Ilay’s mother – a former actor enjoying the limelight whilst his son pushes him to admit some awareness of the political situation at the time.

“2000: Ilay gives up football.” This is where the core of the performance kicks in, and understandably it is as much about the son as it is about the dad. The issue is the treatment Ilay experienced from his team-mates, which he calls “anti-semitism,” and Gert calls “empty-headed bullying.” The audience is addressed less and less until by the final climactic scene they are ignored completely – father and son fight it out, and the reconciliation of their irreconcilable ideologies is the powerful performance they achieve together in this piece.

All The Sex I Ever Had
Direction and concept by Darren O’Donnell, Mammalian Diving Reflex, Canada

Ten perfectly ordinary pensioners from Oldenburg, Bern, and Canada sat behind a plain black press conference table and narrated their lives via sentence-long, awe-inspiringly frank and honest descriptions of all the encounters with sex they ever had. An MC announced the year, and the different stories interwove with each other chronologically, from childhood confusion (“I am 8 years old, and I know that when you kiss a girl they have a baby, and the baby comes out of their bellybutton, but what I don’t know is: What are boys’ bellybuttons for?”) to divorce, abortion, and affairs with prisoners. I can’t remember the last time I laughed so much in a performance, or the last time I was so moved by one – it was clear by the end that there’s no such thing as “perfectly ordinary.”